In the Cleveland Park Historical Society Archives downtown, I found an interesting article from The Uptown Citizen (1/28/88) showing a rendering of the proposed development that was to replace the then-dilapidated Sam’s Park & Shop.  It also included text describing the project from the developer.  Here is what was being proposed:

“Provisions for proposed project at 3501 Connecticut Avenue, the Park and Shop site, include: 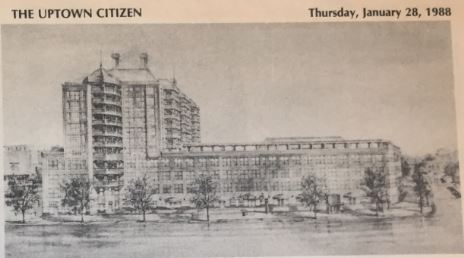 The Park & Shop debate was one of the catalysts that help cement local support for the Cleveland Park nomination to become a protected historic district.

Two things stand out to me about this event that happened 30 years ago:

In fact the benefits of the project seem like just thing our commercial corridor need.  Frankly, the outcome would probably come down to the quality of the design and construction.

Thirty years later this far reaching event deserves an analysis by the community – especially newer residents.  We are living under its shadow and, arguably, suffering its consequences in mediocre retail.